Cholesterol could easily be described as the smoking gun of the last two decades.

It's been blamed for just about every case of heart disease on top of being responsible for demonizing entire categories of foods (like eggs and saturated fats).

We are led to believe that elevated cholesterol is the cause of heart disease.

Cholesterol is a waxy, fatty substance produced by the liver that circulates in your blood.

It performs or assists in thousands of bodily functions such as building cell membranes, nerve sheaths, and much of your brain.

The main function is to build and maintain cell membranes. On top of that, it also:

Let's look at the three kinds of cholesterol

LDLs pick up cholesterol from the liver and deliver it to cells.

HDLs remove excess cholesterol from the blood and take it to the liver. There it’s broken down and passed from the body.

Triglycerides are the most common type of fat in the body; they store excess energy from your diet.

A high triglyceride level combined with low HDL cholesterol or high LDL cholesterol is linked with fatty buildups in artery walls. This increases the risk of heart attack and stroke.

While your brain represents about 2-3% of your total body weight, 25% of the cholesterol in your body is found in your brain, where it plays important roles in such things as membrane function, acts as an antioxidant, and serves as the raw material from which we are able to make things like progesterone, estrogen, cortisol, testosterone and even vitamin D.

Some scientists are trending toward a belief that lifestyle (including food) influences and controls a whopping 95% of our overall condition.

According to the Weston A. Price Foundation, the following are the politically correct dietary guidelines currently on trend:

The danger of these modern guidelines is that the recommended limitations have been established based on foods that are prepackaged, adulterated and modified, contain artificial chemicals, and high fructose corn syrup and artificial sweeteners, all of which may cause inflammation.

This led to the assumption that it’s the type of food that causes problems, with no thought given to industrial processing.

Let’s take a look at these same foods from a different perspective.

So how do we make sense of the foods available to us?

Eat food in its most natural state and enjoy every part of it including cholesterol and fat from healthy animals.

Stay away from the processed, prepackaged, prepared stuff.

Go organic and grass fed if you can and don’t worry about counting calories. Eat to live and live to eat! 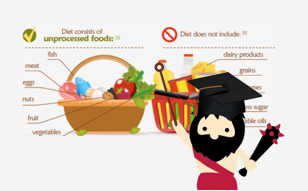